Moustache cups like this one have a half moon-shaped opening which at once allows the passage of liquids and serves as a guard to keep one’s moustache dry. The moustache cup is alleged to have been invented in the 1860s by British potter Harvey Adams. From 1860 to 1916 the British military required soldiers to sport a moustache for the authority it as believed to impart. Moustache wax was applied to the moustache to keep it stiff and in place, however, hot liquids and steam would melt the wax, which would then drip into the cup. Hence the invention of the moustache cup. This cup was donated by the Spoehr family who migrated to South from Germany, and was probably acquired after they arrived. 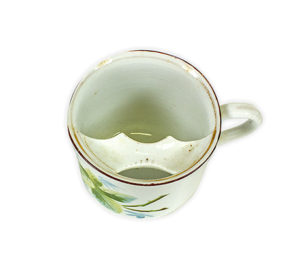