I see this image and I think immediately of Vivienne Westwood’s cowboys t-shirt which was created in 1975 and sold at ‘Sex’, a shop on Kings Road, Chelsea that Westwood ran with her then-lover Malcom McLaren. The interior featured graffiti from Valerie Solanas’ radical feminist 1968 SCUM Manifesto on walls that were covered in rubber and chicken wire. SCUM was an acronym for the Society for Cutting Up Men. Solanas was also infamous for shooting Andy Warhol.

In 2003 Marco Pirroni released a compilation album called SEX: Too Fast to Live, Too Young to Die, featuring some of the music that was played regularly on the jukebox at Sex. Here’s a link to the list of songs: https://en.wikipedia.org/wiki/SEX:_Too_Fast_to_Live_Too_Young_to_Die

Like many others, I used to think that the ‘cowboy’ image was originally produced by Tom of Finland (aka Touko Valio Laaksonen), a Finnish artist known for his stylized highly masculinized fetish art. Tom of Finland has been described by cultural historian Joseph W. Slade, as the “most influential creator of gay pornographic images” (Pornography and Sexual Representation: A Reference Guide, Volume 2. pp. 545–546, Greenwood Press, 2001).

More recently I’ve found out that American artist Jim French produced the image in the late 60s, and that it is part of a series of drawings entitled ‘Longhorns’. French was the co-founder (with Lou Thomas) of Colt Studio, which was established in 1967 and known for its production of nude images (mostly photographs) of butch men. As a photographer, French often shot under the name Rip Colt. A 2017 article in the Advocate marking French’s death describes his “influence on gay male visibility as comparable only to Tom of Finland’s in terms of cultural saturation”.

Westwood’s t-shirt was famously worn by a whole host of punks, including Sid Vicious and  Siouxsie Sioux from Siouxsie and the Banshees. 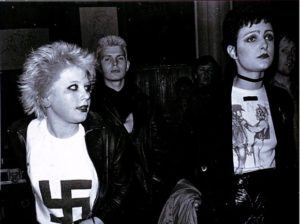 Comforts: things that strengthen and fortify; that offer relief.

What were some of the comforts of the trenches? Socks knitted by loved ones, cigarettes, and letters from home are the obvious answers. But might there have been other, less talked about, less normative, comforts? Comforts that are somehow connected, at least in the imaginary I’ve sketched out here, with cowboys, queers, punks, and radical feminists?